Footprints for life
Back

Freddy has come to our institution to be an example of life for his colleagues and teachers.

Each student arrives at Pies Descalzos to teach us life lessons; In the mornings it is gratifying to see them arrive with their stories and their smiles, with their dreams ahead and ready to learn. This is the case of Freddy, a student who arrives riding on his skateboard, with a big smile, greeting everyone he meets on his way and receiving fraternal embraces.

Freddy Marimón Blanco is an 8th grade student at the Fundación Pies Descalzos Cartagena educational institution, who at 13 years old is a world champion of adapted surfing and who was honored at the last Cartagena Film Festival (FICCI) with a film based on his life; in which a motivating message is communicated “If I can, you can”.

What Is His Story?

Freddy was born with a congenital disease, which deprived him of his legs and his left arm; besides generating a bilateral hip dislocation. This physical condition has not been an impediment for this student to comply not only with his classes and academic duties, but also with his dreams in the world of Surfing.

In Freddy’s words “Discipline and effort are the key, the limits are in the mind, if I can, you can. My case allows people who do not have a disability to be more grateful to God and not complain or give up. ”

Freddy’s journey in surfing has taken giant steps. Last December 2018 he won the world title of this sport of the ISA (World Surfing Association), competing among 24 countries, after Having obtained the bronze in the 2017 version and after having also been in 2018 in Mar de Plata (Argentina), where he was also crowned champion.

A Freddy: Thanks for your existence, because you are one of those who dares to fly !! 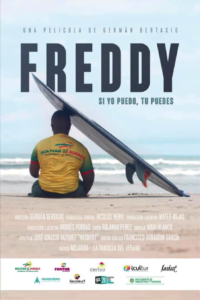 More than 800 students had an ophthalmologic checkup

Encouraging children to pursue their dreams through writing